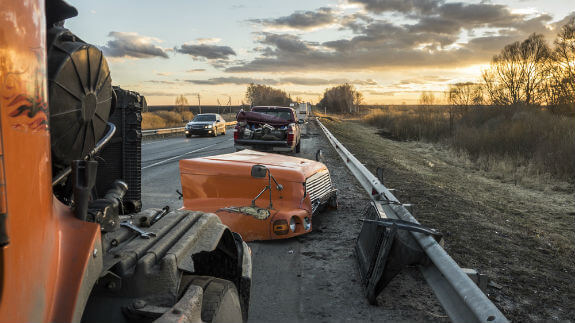 Rear-end collisions are unfortunately commonplace in Texas and may result in a wide range of consequences, from minor vehicle damage to catastrophic injury or even death. Severe injuries are also more likely to occur when a car is struck from behind by a tractor-trailer.

If a semi-truck has rear-ended you, you may have been told by a well-meaning family member or friend that you are automatically entitled to compensation for your injuries. After all, the rear driver in a rear-end collision is always at fault, right? Not so fast.

As in any accident case, the injured party can only recover money damages if they can prove the other driver was negligent. There are no shortcuts to this requirement, even if a semi-truck rear-ended you and you feel that liability is clear. Therefore, no matter how simple the case seems, it is always recommended to have a skilled attorney in your corner.

In most cases, the injured party in a semi-truck rear-end collision can settle and receive a lump sum payment without going to trial and often without ever filing in court. However, if you have been injured in such an accident, the amount available in a potential settlement is determined not only by the strength of your case and the severity of your injuries but also by your ability to negotiate with the trucking company or their insurer.

Having an experienced Houston trucking accident lawyer advocating on your behalf goes a long way toward maximizing the usual settlement for 18-wheeler injuries vs. car accidents.

As mentioned above, the settlement you can get out of your rear-end collision with a semi-truck depends in large part on the strength of your case, which means your ability to prove that the truck driver was negligent. Proving negligence requires showing that the driver failed to exercise the degree of care necessary to avoid an unreasonable risk of harm to others.

Common forms of negligent driving include:

In the context of a rear-end collision, the rear driver is often at fault because they were following too close, did not leave enough time to brake, or did not stop in time because they were distracted, to name a few examples.

The payout for rear-end accidents with a semi-truck will also be dictated by the nature of the injuries and the extent of medical treatment necessary. The at-fault party is typically liable for the injured party’s medical bills and other easily quantifiable expenses, like property damage and lost wages. Additionally, compensation for non-economic damages may be available, such as pain and suffering, mental anguish, and disfigurement or permanent scarring.

Even when the blame lies squarely on the truck driver in a rear-end collision, the trucking company and its insurer will fight tooth and nail to avoid payment, or to pay as little as possible. Since the rear driver is not automatically liable, their strategy is to shift the blame to anyone but the truck driver.

If successful, any of the above the arguments can seriously hurt your chances at a favorable outcome.

How a truck accident attorney can help with your accident settlement

Obtaining a favorable settlement after an 18-wheeler rear-end accident is not automatic. It requires assembling the evidence necessary to establish the truck driver’s negligence, show the extent of your injuries, and prove that the truck driver was at fault. Therefore, it is crucial to find an attorney with the experience and resources to investigate and document your case, and then advocate aggressively for your interests.

Houston personal injury attorney, Richard Schechter, has been representing the victims of truck accidents for over 35 years, fighting for his clients’ right to fair compensation at the settlement table and in the courtroom. If you have been injured in an auto accident, contact our office today for a free consultation.